Ready to do some Winning?

Ready to take it to the next level?  Squash is a highly competitive sport, with numerous was for you to get your “winning on”.  There is a national grading list that essentially ranks all players (Mens and Ladies).  The list is broken up in to grade by bands of points.  It starts at F and goes all the way to A.  Each match you play in competition will count towards your grade.

Around the country there are various tournaments on each weekend, which pit players of similar grade against each other.  Most tournaments guarantee three games and will be run over 2 or 3 days depending on the club and the event.

Here at KP we also enter teams in the Interclub Competition.  Where teams of 4 from each club around Taranaki play weekly in a round robin set of fixtures.  This often involves travel to other clubs and is a great social event as well as the chance to be part of a team in squash.

The pinnacle of squash teams in New Zealand is called Super Champs.  Here each club assembles a team of the 5 best players from each grade (Mens and Ladies) and competes at the district level.  For us here that’s Central Districts (CD).  If the team wins the district they are invited to represent CD at the Nationals, where each district send their winning team.  Competition at these events if fierce, right across the grades with epic battles playing out each year. 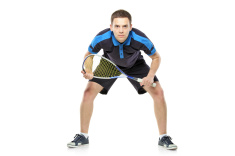